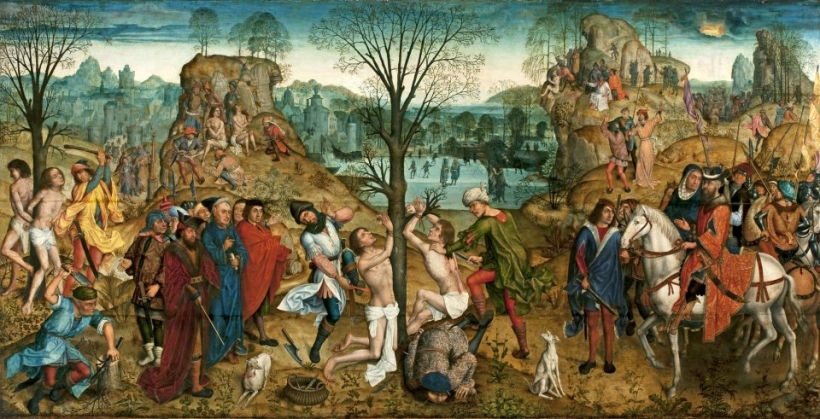 In Shakespeare’s “Henry V”, King Henry overhears a soldier lamenting how few men have come from England to fight in a battle against the French at the Battle of Agincourt, leaving their odds of carrying home a win rather low. He responds with a bold appeal to all the courage left in the hearts of that “band of brothers” who did show up for battle and unites the hope of their victory with the celebration for all time of St. Crispin and Crispianus (Crispinian). It’s worth the watch:

These two saints lived the in middle of the third century in the Roman empire. Allegedly, they were brothers from a noble Roman family. The story from the Bollandists (from which the Catholic Encyclopedia draws their information in the case of these men) tells us that they went to Soissons in Gaul together to preach the faith. While there, they supported themselves financially primarily by making shoes. Their missionary work there was so effective, however, that it caught the attention of the high Roman authorities. A short historical detour is necessary at this point.

Crispin and Crispinian lived in the time of the Roman Emperor Diocletian. Any Christian familiar with some Roman history should be feeling the shiver run down their spine – this man was ruthless. He was Roman emperor from 284 to 305 AD, and in his rule he initiated one of the biggest, cruelest persecutions in early Church history (which is no small statement when the bloodbaths of Emperors Nero and Decius are taken into account). So bad was Diocletian’s persecution that, before Anno Domini (AD) came into fashion for marking years, the Christians (especially of the Alexandrian Church) used Anno Martyrum (AM), or the Era of the Martyrs, to mark their years. The Anno Martyrum system began year 1 in 284 AD – the beginning point of Diocletian’s reign and persecution.

With this in mind, consider that Crispin and Crispinian were preaching the Christian faith rather effectively at this time in Gaul, an important territory of the Roman empire. It did not take long at all for some action to happen. In the year 285 AD (or the year 2 in the Anno Martyrum), Maximianus Herculius, who had been made a sort of co-emperor with Diocletian, called the two men before him. After his efforts to persuade them to give up the faith, they responded,

“Thy threats do not terrify us, for Christ is our life, and death is our gain. Thy rank and possessions are nought to us, for we have long before this sacrificed the like for the sake of Christ and rejoice in what we have done. If thou shouldst acknowledge and love Christ thou wouldst give not only all the treasures of this life, but even the glory of thy crown itself in order through the exercise of compassion to win eternal life.”

Maximianus handed them over to Rictiovarus, the Gallic governor, who had them tortured terribly – stretched on a rack and flesh torn, among other horrible inflictions. After all of this, he had millstones fastened to their necks and had them thrown into the Aisne River. Miraculously, they managed to swim to safety. The Roman Martyrology succinctly finishes the story: “after [these] horrible torments, they were put to the sword, and thus obtained the crown of martyrdom.”

The Catholic Encyclopedia questions some of the credibility of this story, since its sources may be somewhat unreliable. However, we must examine a certain important principle in the matter of saintly stories, since credibility will always loom as an issue in the stories of the obscure saints. I simply quote a section from St. Francis de Sales’ Treatise on the Love of God in which he defends the practice of believing holy stories:

“Charity willingly believeth all things; that is, it is not so quick to believe that any one is lying, and if there are no apparent marks of falsehood in things which are told, it makes no difficulty about believing them; but above all when they are things which exalt and magnify the love of God towards men, or the love of men towards God … in matter of religion, good souls have more sweetness in believing things in which there is more difficulty and admiration.” (Chapter XII)

By means of this argumentation, St. Francis de Sales was insisting that a certain miraculous story told in a homily by St. Bernard could be believed, even though he simply had no evidence whatsoever to prove it. We are in a similar situation. We’ve been handed a story of the miracles and martyrdoms of Crispin and Crispinian with only the written testimony of writers centuries later to show for it. But the good souls have more sweetness to believe stories such as these. Our charity willingly believes all of these things.

Thus,  I would suppose that we can accept the story handed onto us from the works of the Bollandists – but I’ll leave that up to the reader.

So, what if Crispin and Crispinian hadn’t fallen into obscurity? They are already known as patron saints of shoemakers, saddlers, and tanners. But their legacy is more than cobbling. While the modern imagination tends towards Shakespeare’s reference in “Henry V,” it turns out that this reference is not so far from the original spirit of these men. The Battle of Agincourt was a battle in which England triumphed against great odds over France in 1415 AD. But Saints Crispin and Crispinian in their own way triumphed against great odds in France (Gaul at their time), albeit in a spiritual battle for souls.

So let us hail them today as victors all the same! May St. Crispin and St. Crispinian pray for us!

​If you were asked off the top of your head to name five saints of the Catholic Church, who would come to mind? St. Therese of Lisieux, St. Padre Pio, or St. Francis of Assisi? Perhaps St. John Paul II or Mother Teresa? But what about St. Euphemia or St Paphnutius? Surely St. Iphigenia made it somewhere on the list?

​If these latter names don’t ring any Church bells for you, this new column may be right for you. It’s no secret that we have “saint celebrities.” If you’ve lost an item, you think to pray to St. Anthony, not St. Abundantius. If you want help in discernment, you probably prefer St. Therese’s roses to St. Rosalia’s. But what about these other saints? Don’t they have something to teach us, to inspire us with, to remind us?

​This new column, “Sancti Obscuri,” will look at different saints who, for one reason or another, have become obscure to the modern Catholic imagination. The posts won’t be exhaustive, considering how historical obscurity tends to coincide with a paucity of source material. But if these forgotten men and women have received the crown of sainthood, then they have a story worth hearing. (They know something of Thomas Jefferson’s exasperation in this old “Simpsons” episode, “Mr. Lisa Goes to Washington.”)

Our first “sanctus obscurus,” St. Porphyrius, shares a feast day with Our Lady of Sorrows on September 15. In his life, however, he would not have known what to do with a celebration of a “Lady of Sorrows.” By profession, he was a comedian, a mimic, a famous jester. He was a prevailing voice of the remnant of paganism in the post-Constantine Roman Empire, offering to those who hadn’t accepted Christianity a sufficient mockery of its tenets. People expected comedy and corruption from him, certainly not conversion. Yet, as we will see, he was a man who, within a day, went from mimicry to martyrdom, profanation to profession. Before we tell his story, some background is in line.

His story begins best with the story of Julian the Apostate, who, given the spoiler alert in his name, didn’t care for Christianity very much. In the years following the death of Constantine the Great in 337AD, a barrage of complicated politics had plagued the leadership of the vast Roman Empire. Fast forward a couple of decades, and in 361AD one “Flavius Claudius Julianus,” a nephew of Constantine, arose as sole emperor. His reign was to be short (only 20 months), but not without activity.

Although Christianity for almost 50 years had enjoyed political freedom and support from the emperor, the rule of Julian loomed as a serious threat. Though he was a Christian for the first 20 years of his life, he came to reject the Lord and choose instead the “way of Helios” (see his Letter 47). Julian the Apostate envisioned a return to the Roman paganism of old, a religious atmosphere marked by highly syncretistic polytheism, unified, as it were, under the banner of being ‘not Christian.’

When Julian heard of the fame of Porphyrius the Mimic whose specialty was mocking Christians, he had him brought in to entertain the royal court. Everything was set up for a successful show. The audience was eager to be entertained at Christianity’s expense, and Porphyrius had put together a special play; he was going to mock the Mystery of Baptism.

The show was a riot, eliciting raucous laughter to be sure. Things seemed to be lining up perfectly. The climax of the action involved a mock-baptism scene with fake clergy dressed in liturgical garb immersing the “catechumen,” Porphyrius, into some water.

He ceremoniously pronounced that he would now be a follower of Jesus Christ, “in the Name of the Father and the Son and the Holy Spirit” before being immersed. But something happened when Porphyrius entered the water. Submerged in that moment, Porphyrius felt the summons of actual grace, a call to serious conversion. Coming out of the water, he announced his decision to all present that he wished to be a Christian and would no longer mock the Living God. But, while he had his metanoia, the emperor was simply annoyed. The Roman Martyrology sums up best what happened next:

“Forthwith, by order of the emperor, he was struck with an axe, and thus crowned with martyrdom.”

​Struck with the extraordinary work of divine grace, he managed to get struck also by the work of human anger. Having given over his heart to Jesus, he gave his head to the emperor. Thus is the story of the great Martyr Porphyrius. Once a jester before secular courts, he was to become a martyr in the heavenly courts.

​As for Julian the Apostate, his hopes for a revival of Roman paganism would not find widespread success. In 363AD, following Julian’s military death, Emperor Jovian took the emperor’s throne and restored the faith of the Roman Empire to Christianity.

​Suppose St. Porphyrius hadn’t slipped into obscurity in modern spirituality. Comedians and performers would have a ready patron, and the whole Church would have a better sense of God’s poetic justice. As it is, let us at least take the lesson to have sincere reverence for the truth and all holy things even when it puts us in rather difficult situations. Don’t forget to invoke his intercession every September 15!

May St. Porphyrius pray for us, and teach us true reverence for the Lord!