I read a piece recently about a kid who left a pair of glasses on the ground at a modern art museum. Hilarity ensued.

Following our earlier post on the essence of art, now we can ask the question: what makes art good?

We can limit ourselves here to the question of what we’ll call “didactic art,” that is to say we will consider a work inasmuch as it is to be enjoyed for its own sake rather than some practical function like digging a hole or magnifying light… Obviously, in those cases, the measure is how well the job is accomplished.

In didactic art, there is not as clear a solution. One might immediately say that it is “a thing well made which is beautiful.” Okay, but that not only raises the thorny question of what beauty is but also seems to exclude many things that we have an impulse to call good art but would probably not call beautiful. 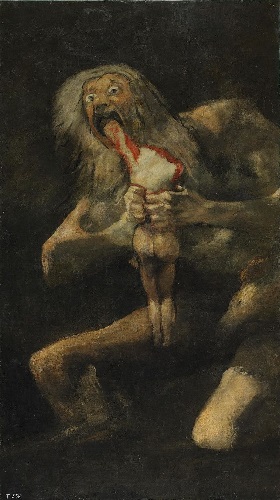 If Francisco de Goya had meant for “Saturn Devouring his Son” to be “beautiful,” we would say he failed. But who would deny that this is good art?

Here’s a radical thought… Not all points should be made, not all feelings effected, and so on. If the point is not something true, or if the idea is to make one hate something good – or even to feel a disordered passion, like lust – perhaps it can’t be good didactic art. Alternatively, if there is no message, or the message is so obscure as to be comical (as highlighted so well by the glasses prank), or the message is obscured by the work evoking some distracting feeling (like sensuality), perhaps it can’t be good didactic art. The intention must be a worthy one, and how well that worthy intention is communicated through craftsmanship would be the measure. Here is a familiar painting we might consider:

“Conversion on the Way to Damascus” by Caravaggio was a wildly controversial work upon its release. It was thought sacrilegious that the hind end of a horse would occupy the main focus of such a scene! One could see why that might have had an adverse effect on people, especially when it is coupled with Caravaggio’s scandalous life, a life that even included having the pope give him a death sentence (which he evaded by running off to Malta and then bribing a relative of the Holy Father with several paintings).

This work has become greatly admired though, to the point where most people think that the Scriptures actually say Paul fell of a horse on the way to Damascus! But is the shift in public opinion due to a better appreciation of a righteous intention or a deadening of spiritual sensitivities?

Of course there is no doubt that it is well crafted: the chiascurro, the perspective, the expressions – all wonderful. But was Caravaggio making fun of St. Paul? We can only wonder at his intention, but if it was evil and we get only good out of the work anyway, it is by accident rather than by art.

Just some food for thought.

So maybe didactic art, too, is about “how well the job gets done,” but the job is done in the audience themselves. And maybe good art is more about truth and goodness than beauty… But we’ll keep beauty in our tagline anyway.