Why is the Bible so boring sometimes? Consider today’s first reading. Read as it is written on the page, St. Paul seems to be repetitive, condescending, and platitudinous. This section of the letter seems to say, “You Thessalonians are doing a good job. I want you to keep doing well, and keep improving.” You hardly need St. Paul to tell you that you should try to do good. But, before we write off St. Paul, we might consider if the text has some hidden gems, that we only need the right interpretive key to unlock. In other words, the Bible might be boring sometimes, not because of how its written, but because of how we read it.

We might begin by remembering that this letter, like many if not all of the epistles, was likely intended to be read aloud. Thus, instead of reading it in paragraph form, we should look for certain structures that we would expect in an oral speech of the time period. One of those is what’s called a chiastic structure. A chiastic structure is essentially a “pyramid pattern” where a theme presented at the beginning is repeated in a modulated fashion at the end, often with repeated words; a second theme presented after the first one is then the second to last presented in a similar modulated fashion, and so on so forth. This reversed repetition circles a central theme in the middle. We might visually represent it like this:

This kind of pattern is found throughout the bible as well as other oral works from diverse places and time periods. Here is one from the story of Noah:

Here is one from Beowulf:

Is there one in today’s reading? I actually think there are two. I also think that these chiastic structures, are part of a three part movement including Thessalonians 4:9-12, which together make a larger ABA’ pattern. So, instead of reading the passage in the block paragraph format, let’s try something like this: 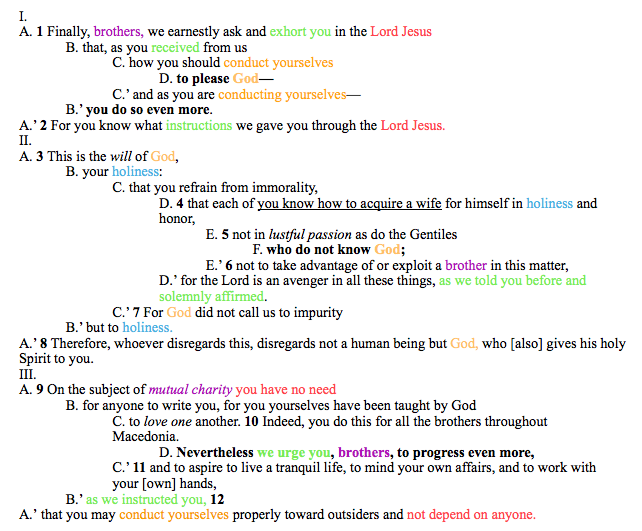 Clearly there is a lot here to unpack, and this is only scratching the surface. I also don’t want to pretend this reading of the text is necessarily the best. I am sure someone with more education would find an even better way to read this passage. But for our purposes, this helps us get a sense of how these words may have read to the ancient readers of this text. Not wanting to try to say too much and losing important things in the deluge, I won’t comment on everything I’ve picked out here, but only on some of the key moments of the text.

First, Paul refers to his audience as brothers. This is the same word as Jesus used in Matthew 23:8 when he said to the disciples that they are all brothers in the one Teacher (Himself.) Paul’s use of this term here and elsewhere shows the understanding that by receiving Christ’s word, the newly baptized also share in that brotherhood of Christ. More will be brought out on the use of this word later.

The center of the first chiasm seems to be “to please God.” Right away, Paul is putting a context around the exhortation he is giving to his readers. We don’t “conduct ourselves” rightly for our own sake, we do it in order to please God; or, as the Greek word literally means “to win God’s favor and affection by being in moral agreeement with him.”

Moving on to the second chiasm, we see the phrase, “This is the will of God, your holiness.” Already, Paul is advancing his argument. In the first chiasm, he said that we “conduct ourselves” rightly in order to please God. Now, he’s advanced his argument by saying, “What pleases God is your holiness.” The word for holiness in Greek, when applied to believers means “being transformed by the Lord into His likeness.” Thus, we’re not just good because God likes it when we are good, and we like it when God is pleased with us. In fact, we are good because being good makes us more like God.

Next, I underlined the phrase “you know how to acquire a wife,” because it’s linguistically interesting. The phrase literally rendered might read something like “to know how to win mastery over your own vessel.” Clearly, this is an idiom of some sort, but there are actually two possible interpretations. The first is the one above, where “vessel” means wife and “win mastery” means acquire. This is certainly possible. St. Peter referred to wives as vessels (1 Peter 3:7) so there is certainly a precedent for this interpretation. However, there is another equally strong interpretation where vessel means one’s body. Hence, Paul is exhorting his listeners to gain mastery over their body. Personally, I prefer the second interpretation, given that the first seems to suggest that Paul is encouraging marriage, whereas in the majority of his letters he seems to promote celibacy as the ideal. However, both interpretations have strong scholarship behind them, and at this point there is no clear scholarly answer as to which 1st century Christians would have taken. It is also possible that Paul was aware of the double meaning here, and deliberately left it vague.

As we near the climax of this passage, we are given a clear contrast between the brothers and the Gentiles. The brothers follow the will of God for holiness. The Gentiles follow their passionate lust because they do not know God. It’s interesting to note that the language here mirrors this contrast. The word for will is θέλημά (Thelayma) and the word for lust is θυμία (Thymia). This similarity would not have gone unnoticed in an oral reading.

Now, having established a contrast between the brothers and the Gentiles, Paul does something interesting. Paul says, “not to take or exploit a brother.” This is striking because of the seemingly limited scope. Are Christians only not to exploit other Christians? How can St. Paul, the apostle to the Gentiles as he is called, seem to take such an anti-Gentile position? Keep this question in mind as we get to the end of the text.

This brings us to our climax of the third chiasm. Paul writes, “Nevertheless, we urge you, brothers, to progress even more.” We’ve heard this language of even more before, in the first chiasm. Taking the interpretation given, Paul has just revealed what he means by “do so even more” or “progress even more.” He is calling them from a brotherly affection with each other into agape love, Christian love, the unbounded love of Jesus Christ.

It is finally at the conclusion where Paul tips his hand. Paul is calling them to live a tranquil life and essentially be good citizens so that they can conduct themselves properly toward outsiders. Here Paul resolves the dichotomy between the Brothers and The Gentiles or Outsiders. Remember, in the beginning we said that “conducting yourselves” can also mean “walk.” Perhaps, this part of the passage ought to be read as a call to live the law of Christ in faith in order to walk toward the outsider. Perhaps, this passage is not meant merely to distinguish between the brethren and the gentile, but to encourage the brothers to bring the gentile into the brethren. Essentially, Paul appears to be encouraging evangelism, first, by moving from a love among brothers to a universal love of and through Christ, and second, by living the law of Christ ourselves.

If this is what St. Paul is asking of us, I think that raises a lot of questions for us today. When we speak of evangelism today in our local parish, do we seem to be following the advice of St. Paul? Do potential churchgoers see Christians living a calm life of service to the community such that they know that our faith impacts the way we work and live? Do we hold ourselves up to the high standards of St. Paul, and thus attract possible converts by living an attractive life? Or do we try to sink to their level in order to be “relevant?”

Conversely, do we live the high demands of a Christian life for the sake of sharing the joy of the Christians life with others, or does our close-knit parish community become a clique separated from outsiders? For example, I remember a parish I was at once that had a meeting on evangelization that was trying to answer the question, “Why don’t we get more newcomers?” When asked what was positive about the parish, the people present said, “We are a small community parish with families that have known each other for ages and we want to keep it that way.” It wasn’t until someone pointed out the dichotomy between this sentiment and the desire to attract new people that those present began to realize the deep messaging problems they were having. These were certainly not bad people! Between them, they dedicated countless hours of service and underpaid employment to the parish out of love for God and their community. Any parish would be lucky to have people like them! However, what St. Paul is reminding us today is that God calls us not just to love our church family, but to love all people, in the hopes, that through our evangelism, all people are led to Christ, and all people are then members of our Church family.

-References to Greek words in the passage were done through biblehub.com
-Chiastic structures for the Noah and Beowulf passages taken from the wikipedia article for Chiastic Structure
-Main image is “Paul preaching at the Areopagus” by Raphael